A. Remember the Participle I, II

a. breaking
b. broken

a. talking
b. talked

a. entering
b. entered

a. thinking
b. thought

a. walking
b. walked

a. asking
b. asked

a. reading
b. read

a. hearing
b. heard

a. building
b. built

a. dividing
b. divided

a. building
b. being built
c. having built
d. having been built
e. built

a. admiring
b. being admired
c. having admired
d. having been admired
e. admired

a. working
b. being worked
c. having worked
d. having been worked
e. admired

a. calling
b. being called
c. having called
d. having been called
e. called

a. writing
b. being written
c. having written
d. having been written
e. written

D. Listen to the text and choose the right answers

Who was Sherlock Holmes? 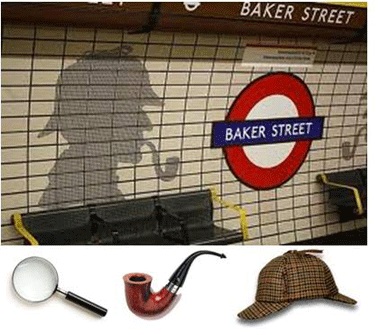 When Sir Arthur Conan Doyle wrote his first Sherlock Holmes mystery in 1887, he could not have imagined just how famous his hero would become. Sherlock Holmes is the most famous fictional detective in the world. His stories have been translated into over 60 languages, and we still watch films and TV series of the stories today. So what makes him such an enduring character?

Sherlock Holmes lived at 221b, Baker Street, London. Even though this was the address of a fictional character, it has now been turned into a Sherlock Holmes museum, and as you can see in the top picture, the London Tube station nearby has his famous profile picture on the walls, wearing a deerstalker hat and smoking a pipe. Holmes shared much of the detective work with his friend Dr Watson, who could be described in modern terms as Holmes's sidekick, in other words, the one who helps him but is not as clever or important as him. In nearly all modern detective TV programs and films, the main detective has a sidekick – such as Smithers in DailyStep's own Smithers and Boyle!

Holmes was an eccentric character, who could solve any crime, no matter how complex it may be, using only his powers of logical deduction, his sharp observation and, of course, his magnifying glass, which you can see in the bottom left hand picture. However, in his personal habits, he was very untidy and apparently disorganised. Here is a revealing quote about Holmes by Dr Watson:

"Although in his methods of thought he was the neatest and most methodical of mankind ... He keeps his cigars in the coal-scuttle, his tobacco in the toe end of a Persian slipper, and his unanswered correspondence transfixed by a jack-knife into the very centre of his wooden mantelpiece ... He had a horror of destroying documents.... Thus month after month his papers accumulated, until every corner of the room was stacked with bundles of manuscript which were on no account to be burned, and which could not be put away save by their owner."

In other words, Holmes was untidy, disorganised and a hoarder – not qualities which we would expect from such a man! But it is idiosyncrasies such as these which make him such a real character, even someone we can identify with!"

Holmes's arch-enemy was Professor Moriarty, who was a criminal mastermind and was described by Holmes as the 'Napoleon of Crime'. Even though Moriarty appears in only two of the Sherlock Holmes stories, it is Holmes's attitude to him that has made him one of the most famous of all fictional criminals.

A2 Sherlock Holmes was the neatest and most methodical of mankind.

A3 Sherlock had a horror of destroying documents.

A4 Sherlock burned his bundles of manuscript himself.

A5 Holmes's arch-enemy was Professor Moriarty.

A6 Sherlock Holmes is the most famous fictional detective in the world.