If you have ever visited London, or even if you have looked at pictures of London, then I am pretty sure you have seen Big Ben. It is the most iconic image of London – the huge, ornate clock at the top of the Houses of Parliament in Westminster.

Big Ben is actually the name of the enormous bell inside the clock of the Houses of Parliament. We also say Big Ben when we refer to the whole clock tower as well. You can see the clock in the top picture, and the bell in the bottom picture. The clock first chimed its famous chimes on 31st May, 1859. There are actually 5 bells in the clock. Big Ben is the biggest bell, and every hour a hammer strikes the time on it. If it is five o'clock, the hammer strikes it five times. The other 4 bells are called 'quarter bells', because they chime every fifteen minutes, or every quarter of an hour.

Why is it called Big Ben? No-one is quite sure, but it was named after one of two men who were both known as Big Ben at the time the clock was built. The first man was Sir Benjamin Hall. He commissioned the new Houses of Parliament to be built, and he was also a very large man. His friends called him Big Ben. The second man was Benjamin Caunt, who was the heavyweight boxing champion of 1841. His nickname was Big Ben.

Big Ben is Britain's most important clock. Its chimes are used at the beginning of many TV and radio news programs, a tradition that dates back to 1923. The clock has hardly ever stopped - even during the Second World War, when London was bombed in the Blitz and part of the Houses of Parliament was destroyed, the clock continued to strike the time.

The four clock faces of Big Ben are illuminated when it gets dark, as you can see in the picture, and we can see them from miles around in London. It's one of the most famous landmarks in the London skyline, along with St Paul's Cathedral and the Tower of London. These days, though, it is getting harder to see them from a distance as many modern skyscrapers are built. 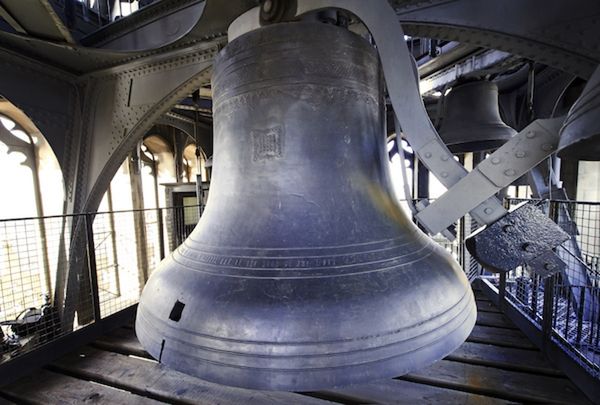 A1. Big Ben is a tower clock at the top of the Houses of Parliament in Westminster.

A2. The biggest bells inside the tower are 'quarter bells'.

A3. Benjamin Caunt commissioned the new Houses of Parliament to be built.

A4. The clock stopped during the Second World War.

A5. Big Ben is the highest tower clock in the world.

B. Complete the sentences. Use the Passive Voice of the verbs in the box.


1. Those guys ran with all their might. They were followed by the police dogs.

2. Where is English spoken?

3. Last night the picture was stolen from the museum.

4. The buildings were ruined by the fire.

6. The game of tennis was won by Andre Agassi, the famous tennis player.

7. The bear cub was fed by the children.

9. Jane was invited to the party. But really she didn't like the idea.

10. Television was invented by Baird, wasn't it?

C. Change the following sentences into the Passive